The filter system of a quadrupole mass spectrometer consists of four parallel rods arranged in the form of a square. Each pair of opposite rods in Figure 6.5, designated (+) or (-), is connected to each other. Between the two pairs of rods, an electrical voltage consisting of a DC portion $U$ and an AC portion with amplitude $V$ and frequency $f=\omega / 2\pi$ applied:

At this point, only a brief phenomenological description of the operating principle will be provided. For a more detailed description, please refer to the special literature [29, 30, 31]. 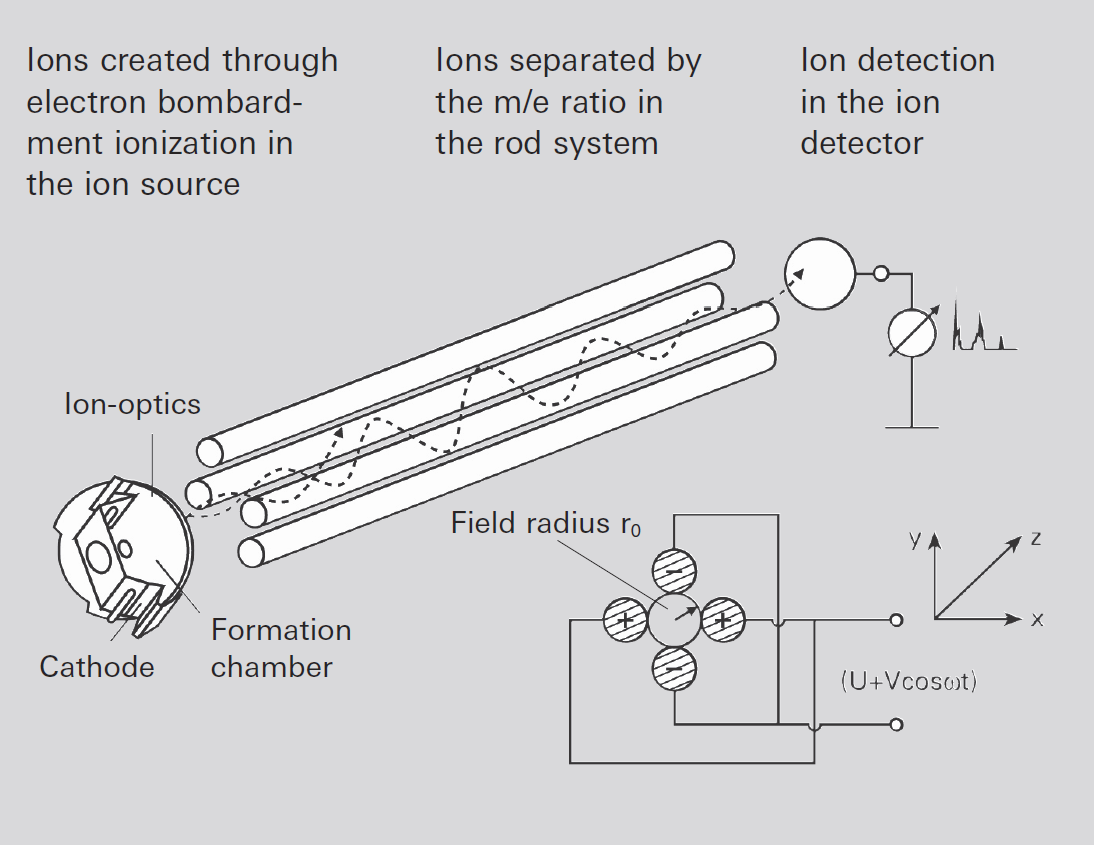 Ideal quadrupole fields require rods that have a hyperbolic profile. In actual practice, however, cylindrcal rods are used, with the rod radius being equal to 1.144 times the field radius $r_0$ (refer to Figure 6.5 for a definition of the field radius). An electrical quadrupole field is formed between the rods. Ions of varying mass are injected axially into the rod system at approximately equal energy and move through the rod system at uniform velocity. The applied quadrupole field deflects the ions in the X and Y directions, causing them to describe helical trajectories around the Z axis through the mass filter. If the amplitude of the trajectory oscillation is smaller than field radius $r_0$, the ions reach the detector; if the amplitude exceeds this the ions will discharge on the rods or the surrounding surfaces and will not pass through the filter.

To solve the equations of motion, two dimensionless variables $a$ and $q$ are introduced which combine the parameters of the quadrupole (DC voltage $U$, AC amplitude $V$, field radius $r_0$, angular frequency $\omega = 2\pi f$) and that of the ion (charge $Q=z \cdot e$, mass $m=M \cdot m_u$).

With this simplification, Mathieu’s differential equations are obtained, the solutions for which are well-known in mathematics; they can be used to calculate the range of stable trajectories with oscillation amplitudes $r_{max} < r_0 $ for pairings of stability parameters a and q located under the triangle formed by the two limiting curves in Figure 6.6. All solutions outside this range result in increasing oscillation amplitudes and thus in neutralization of the ions on the quadrupole filter rods. Dividing the two equations by one another gives: $a/q=2U/V$. This is the slope of the so-called load line of the mass filter. 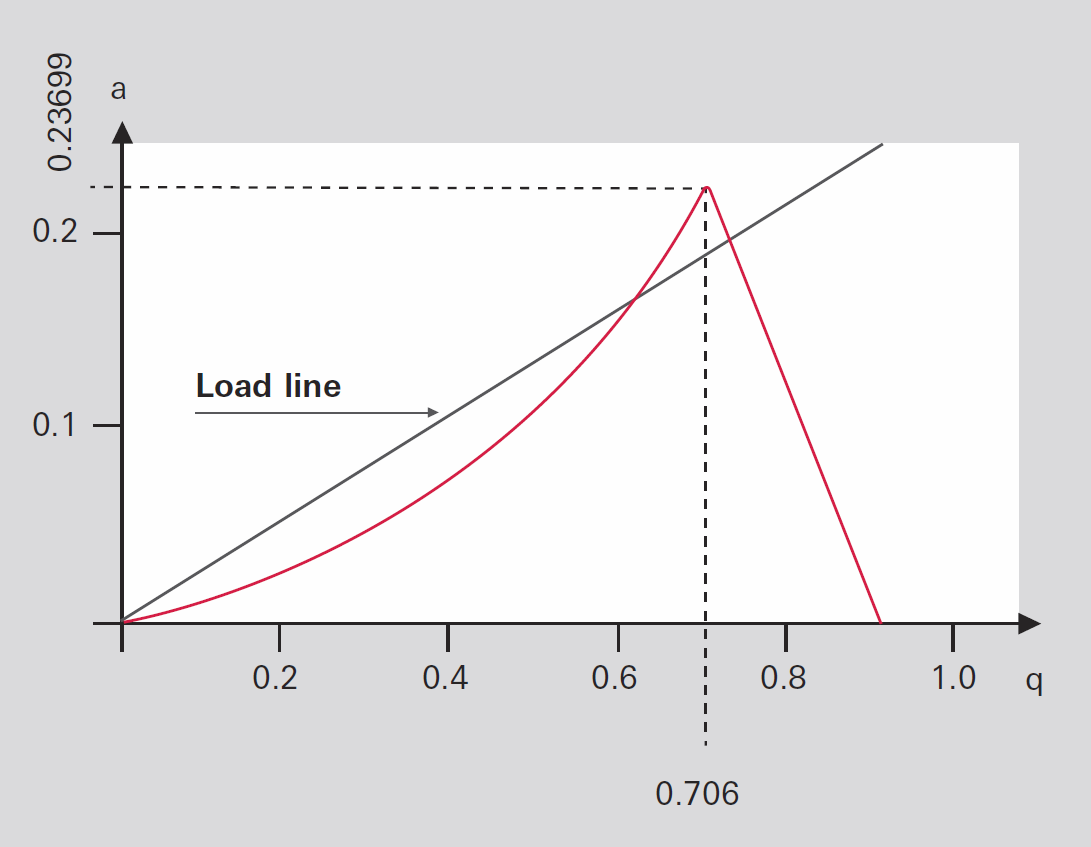 i. e. where the load line intersects the stability range. All ions whose parameters $a$ and $q$ are located in the triangle above the load lines will reach the detector.

The stability conditions show that at a fixed frequency, there is a direct proportionality between the voltages and the masses at the quadrupole filter and that a linear mass scale is obtained with varying voltage amplitudes.

Where $k_H$ = 1.0801 · 107 A s kg-1 is a constant. The filter thus acts as a high pass in this operating mode. As the RF amplitude $V$ increases, ever-heavier types of ions become unstable, starting with the light masses, and are thus separated out. This operating mode produces an integral spectrum and allows a total pressure measurement to be carried out.

The ion injection conditions are crucial for transmission of ions through the filter. Ions must enter the quadrupole in an area as close as possible to the center of the rod system and ideally move parallel to the axis of the rod.

The greater the field diameter (distance between rods) and the longer the quadrupole (rod length), the easier it is to fulfill these conditions. In addition, the geometric accuracy (production tolerances) is easier to achieve the greater the rod dimensions.

In practical operation, the ratio $U/V$ s activated as a function of the mass number in such a manner that the actual resolution $M/\Delta M$, does not remain constant, but that instead the line width $\Delta M$ remains constant. This means that resolution increases proportionally to the mass number. Due to Formula 6-9 ($V$ is proportional to $M$) the quadrupole (as opposed to the sector field mass spectrometer) produces a linear mass scale.

with high powers of $f$ and $r_0$. An enlargement of field radius $r_0$ will lessen the relative mechanical tolerances that occur, thus resulting in improved behavior. Essentially, it is advantageous to select $f$0 and $r_0$ as large as possible. However there are limits to this due to the associated increase in RF power according to Fomula 6-11. While extending the rod system permits a lower operating frequency, the size of a production unit should not exceed certain practical dimensions.

The required mass range and desired resolution are governed by the dimensions of the filter and the operating frequency selected. Devices with 6, 8 and 16 mm rod diameters and appropriately matched electronics are available to satisfy the satisfy most requirements.

What follows is a brief digression on the relationship between resolution and mechanical precision. Let us consider a quadrupole mass filter that works at the apex of the stability diagram; i.e. with high resolution. The following equation applies Fomula 6-8:

for the DC amplitude and Fomula 6-9

for the AC amplitude. Here, $M$designates the mass of the ion, $r_0$ the field radius and $f$ the frequency at which the filter is operated. We are making the idealized assumption that both voltages $U$ and $V$, as well as frequency $f$, can be set and maintained “as precisely as desired.”

($c_k$ is a constant) and following differentiation, division by $M$ and determination of the value, the filter scatter caused by $r_0$ is:

Although this simplified error calculation by no means takes into account all of the effects that can contribute to transmission, it does demonstrate several fundamental relationships:

The larger the dimensions of the rod system are selected, the lower the influence of the absolute mechanical tolerances will be.

A quadrupole mass filter is a dynamic mass filter for positive and negative ions. The mass scale is linear to the applied amplitude of the RF voltage. Mass resolution can be conveniently and electrically set by means of the ratio between the DC voltage $U$ and the high-frequency voltage amplitude $V$ Due to their compact dimensions and light weight, quadrupole mass spectrometers are suitable both as pure residual gas analyzers and, in higher-quality design, as sensors for gas analysis.